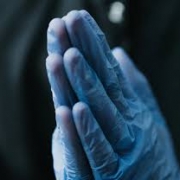 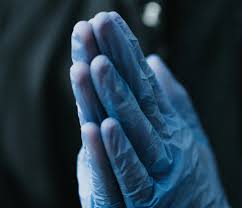 To assist with how to manage your PPE the Government have published these case studies so you can relate them to your own work.

Angel and Laila received their weekly rota emails from Karen, the manager of the care agency they worked for.

The rota listed the clients they would be visiting during the week. As Angel’s shift started at 6am she went to see Mrs Kowalski first, Mrs Kowalski was an early riser. On arriving at the house Angel usually lets herself into the property using the key which was in the key safe near the front door.

However, because of COVID-19 she was taking extra precautions, so she wiped down the key pad with a wipe before opening it and taking out the key. As usual, she called out good morning to Mrs Kowalski to let her know she had arrived, whilst at the same time cleaning her hands with alcohol gel. Angel’s job that morning was to help Mrs Kowalski get out of bed, help her walk to the bathroom for a wash, help her get dressed and prepare her breakfast. She would then wash the dishes, clean down the surfaces, and put some laundry in the washing machine. As Mrs Kowalski needed personal care Angel put on her PPE in the hallway.

First, she put on her apron, secured the facemask, eye protection (Mrs Kowalski had a habit of sneezing frequently) and lastly her gloves. While putting on PPE, Angel talked to Mrs Kowalski explaining why she needed to wear it and how it helps prevent them both being exposed to the virus. Angel changed her gloves and apron (placing the previous ones in the refuse bag) and washed her hands between caring for Mrs Kowalski and doing the cleaning tasks. After completing the cleaning tasks, Angel took off the gloves and apron and disposed of them in the same refuse bag which she carried with her, before placing it in the dustbin outside Mrs Kowalski’s house.

She then cleaned her hands using the alcohol gel she had brought with her. As she was going to visit another client just two doors away, she did not need to take off her mask as this was still comfortable, intact and had not been contaminated by any sneezing during the visit.

Angels next call was fairly close, so she walked to the flat where the Southwick family live.

Rowan and his wife Hazel lived with their adult son Arran and their pet dog. Rowan has chest problems from his previous occupation as a miner and enjoys a beer and a cigarette. Rowan understood that because of COVID-19 Angel had to limit contact with his other family members and understood the reasons why the dog and his wife were asked to stay in another room in the flat whilst Angel helped him get out of bed and dressed.

Angel still had her mask on from her previous visit, so she just needed to clean her hands with alcohol gel and put on a new apron followed by new gloves which she did when she arrived at the house. Rowan was usually chesty in the mornings and Angel helped him to cough into his tissues and dispose of them correctly. When Angel had finished her job and Rowan was comfortable, she called to the rest of the family to say that she was finished but asked for them to give her a few minutes to take off her PPE.

Angel removed her PPE by stepping towards the door, carefully taking off her gloves, placing them in the rubbish bag and cleaning her hands with alcohol gel. She then removed her apron, taking care not to touch the front of the apron and placed the apron in the rubbish bag, alcohol gelling her hands again. She then removed her mask extremely carefully, making sure that she did not touch the front of the mask because it could be contaminated.

Finally, she cleaned her hands again with alcohol gel. She carefully placed the PPE in the rubbish bag.

This site uses cookies. By continuing to browse the site, you are agreeing to our use of cookies.

We may request cookies to be set on your device. We use cookies to let us know when you visit our websites, how you interact with us, to enrich your user experience, and to customize your relationship with our website.

Click on the different category headings to find out more. You can also change some of your preferences. Note that blocking some types of cookies may impact your experience on our websites and the services we are able to offer.

These cookies are strictly necessary to provide you with services available through our website and to use some of its features.

Because these cookies are strictly necessary to deliver the website, refuseing them will have impact how our site functions. You always can block or delete cookies by changing your browser settings and force blocking all cookies on this website. But this will always prompt you to accept/refuse cookies when revisiting our site.

We fully respect if you want to refuse cookies but to avoid asking you again and again kindly allow us to store a cookie for that. You are free to opt out any time or opt in for other cookies to get a better experience. If you refuse cookies we will remove all set cookies in our domain.

We provide you with a list of stored cookies on your computer in our domain so you can check what we stored. Due to security reasons we are not able to show or modify cookies from other domains. You can check these in your browser security settings.

These cookies collect information that is used either in aggregate form to help us understand how our website is being used or how effective our marketing campaigns are, or to help us customize our website and application for you in order to enhance your experience.

If you do not want that we track your visist to our site you can disable tracking in your browser here:

We also use different external services like Google Webfonts, Google Maps, and external Video providers. Since these providers may collect personal data like your IP address we allow you to block them here. Please be aware that this might heavily reduce the functionality and appearance of our site. Changes will take effect once you reload the page.